A momentous thing happened in our family this past Friday night.  It was unexpected, but the surprise element made it that much more exciting.  After taking Atalie to the bus for school, Griffin and I ran errands and then asked a friend to go to lunch with us.  As we were sitting in the restaurant eating I got a text message from Greg:  “Have you heard the message from K on the voicemail yet?”  Uh.  I’m out to lunch.  No.  “What’s up?”, I reply.  “K* wants to know if Atalie can spend the night with A* tonight.  It would be A*’s first spover and she’s asked for it to be with Atalie!  Atalie could just walk home with K* and A* after school, eat dinner, watch a movie, then see how long Atalie is comfortable with the spover.  If we have to go get her in the middle of the night then so be it.  What do you think?”  (A* is K*’s oldest daughter)

What do I think?  My Atalie has been D-Y-I-N-G to be asked to spover at a friends house and the fact that her bestie has just asked her puts me over the moon!  YES!!!  I can’t imagine how Atalie is going to react when K* goes into her classroom and tells her that she’s able to go over to play AND stay the night as well!  I text back, “Can you take care of things?  I think I’m going to be emotional.”  Reply, “Yup.”  And there, it’s done.  My 10 year old is *finally* spending the night at a friends house!   Her *best* friend’s house!  (and can I say here that one afternoon I asked Atalie why A* is her best friend and she tells me,  “A* just gets me.  We don’t have to talk to be having fun.”  {my heart melted}  Not fair.  Does she even understand how long it takes to get a friend like that?  I’m envious. 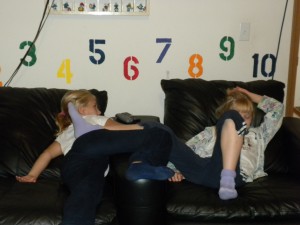 Since this was a huge event both moms forgot to take pictures.  So, we had to improvise the next day.  A*’s family has a media room with surround sound, big screen and theatre chairs.  The whole she-bang.  The whole family watched a movie.  It was so loud that they didn’t hear us knocking on the door to drop off Atalie’s stuff.  I had to call them to tell them we were there.  Yeah, that’s fun. 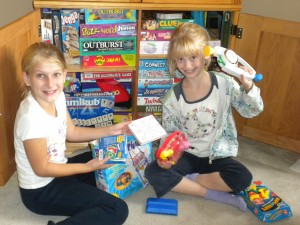 The games that Atalie and A* played.  The two stayed up till 1AM.  Yup, 1 o’clock in the morning.  After the movie and playing games they were put to bed at 10:30.  Atalie called us to tell us good night and did shed a few tears on the phone.  I was told that after she hung up the entire family gave her a group hug.  (I heart this family)  They were told they could talk for a while before going to sleep.  At 11:30 when K* went to bed they were still talking.  When K* woke up at 1AM she could still hear them talking and went to go tell them it was time to sleep.  K* walked into A*’s room and A* asked, “Mom!  Why do you look like that?”  I think K* was thinking, “this is what I look like at 1AM!”  K* told me that the girls had gotten out A*’s Dr. Seuss Spanish Dictionary and were teaching themselves Spanish.  Well, of course they would be.  There is a new student in their class that doesn’t speak English and these girls are nice enough to want to learn another language so they can talk to him.  In the middle of the night. 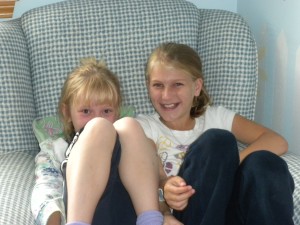 Atalie and A* sitting in the chair where they taught themselves Spanish.  Goofy girls. 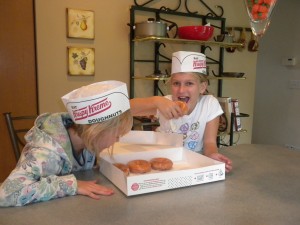 At 7:10AM Atalie and A* wake up and are ready to get going on the day.  A*’s family, thank goodness, are not only good about getting up early, but doing fun things as a family.  They put me to shame really, but that’s a different post.  K*, her husband, S*, A*, her sister K*, and Atalie head to Krispy Kreme for a dozen glazed stomach aches  donuts.

I know that this was a good experience.  No, I know it was a great one.  Atalie and A* have been best buds since Kindergarten.  They have been in Girl Scouts together and in the same class at school.  They support each other and make each other laugh.  They are also there to be that hug the other one needs when things just aren’t going the way they are supposed to.  They are Super Twins that are unstoppable when they are together, yet are each others’ strength when they are a room apart.  And just by a glance from across that room they know that the other loves them, accepts them, and is encouraging them.  They have what so many adults don’t have.  Or *did* have and for some reason or another have lost.  It’s rare.  It’s important.  I hope it lasts for many, many years to come. 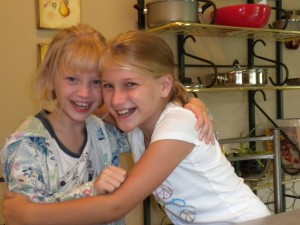 Congratulations Atalie and A* on your first spovers!  This is just the beginning.  There is so much more waiting for you.  I can’t wait to watch!

*names were kept at a minimum because I didn’t get permission to use their real names before I started writing this.  I’m sure that everyone would have been fine with me using their real names, but just in case.  And, quite frankly, *’s were easier to type than the whole names.  🙂

**Spover: teenage-ese for ‘sleepover’.  My son used it so much when he first started having sleepovers that it’s just stuck.  Feel free to use it.  It’s a fun word.

PS, You can tell just how tired Atalie is in these photos, she looks like she is about to cry in all of them.

PSS, while I may not remember THE first sleepover, I remember that starting at a very young age (younger than 10 I’m sure) I spent the night A LOT with Sande Bennett.  Oh the good times . . .