My sister sent this to me.  Her timing was perfect.  I very much needed the laugh today.  I hope you enjoy it as much as I did.

Last night we were to share an evening with some very close friends eating homemade soups, salads, and bread sticks.  Then a little dessert and the boys were to start a great game of Risk.  Well, the soup, salad, and sourdough bread was fabulous.  The chocolate cookies were okay but since they were from a box they weren’t much to write home about.  The game of Risk?  Well, it never started.  As we ate our dinner the two 16 year old girls (one mine, the other belonging to the other family – but I still claim her) start talking about Mormon Prom that’s coming up in May.  This is the first year that either of our girls are able to attend, and M* already has a date.  Colleen has been a little more stressed than she should about being asked out or being the one to do the asking.  We all knew who she wanted to ask (or be asked by) but things weren’t moving very quickly so we all encouraged her to take the matters in to her own hands.  It’s 2011 for Pete’s sake!  There is nothing wrong with the females asking a guy to go on a date.  So the next step was a creative way of going about asking A* to the dance.  A* likes the tuba, but we couldn’t come up with a phrase using the word that flowed.  “You wan’tuba’ my date for prom?” just doesn’t sound right.  Agreed?  So we left the tuba idea.  A* likes food.  Sugar.  At the last party we had here at the house all of the teens decorated sugar cookies and A*’s had a ton of frosting and candy on it.  We thought about making sugar cookie hearts with words on them to ask.  BO-RING!  Trust me, with our family and the other family that was here, we knew we could come up with better.  A* also like baseball.  [ding, ding, ding, ding!]  Baseball it was.  Cookie with the question?  Nah.  Cake in the shape with a cute note? Blah. A real baseball with the question, “A* Will you go to M. Prom with me? {heart} Colleen” written in sharpie on it?  OH to the YEAH.  But why leave it at that?  Why don’t we go to his house and serenade him?  “(Don’t)Take Me Out To The Ballgame” our style.  In about 20 minutes  6 of us had this version created and down pat:

Don’t take her out to the ballgame

Take her out to the prom!

Buy her some flowers and chocolate too

Dress up real nice and you’ll both be so cute

Because YOU, TWO, would be so cute

At the Mormon Prom!

Good, right?  The final question was, when should we do this?  Well, is A* home NOW?  K* made a phone call and found that he was indeed home by himself.  She then called S* (A*’s mom) to let her know what was going on (with both families there is 11 of us total and we wanted her to know we would all be there)  S* wanted to see it so she was going to try her best to get there.

We dolled Colleen up in a baseball jersey, baseball cap, and a mitt so that she could kinda toss the ‘question baseball’ in it while she waited to throw it to him.  Some of the rest of us donned baseball caps as well and M* went as far as to take a bat so she could do some bodily damage in case A* said no.  Silly girl.  We took peanuts and hundreds of baseball cards to toss in the air, like confetti, if the answer was yes.  And away we went.

A*’s parents and brother were home by the time we pulled into their driveway. (mind you this was almost 9:30 at night)  We rang the bell and the parents came out, called A* to come too.  Colleen stood on the porch while the rest of us stood behind her and sang the song (Cameron even played the tune on his acoustic)  Greg got pictures of the whole thing.  Not very good ones since it was dark out, but still, cute.  After the song, Colleen handed A* the ball because she was shaking too badly to toss it to him.  He read it and said, “YES!” in a very happy way.  His dad told him that he needed to write the answer on the baseball and give it back to Colleen.  A*’s mom quickly said, “I’ll go get a sharpie!”  (I think they were excited too)  A* wrote “YES!” (in all caps with the exclamation point even) on the ball and gave it back to Colleen.  Baseball cards were thrown in the air as were peanuts.  It was a very exciting thing.

It’s cute to help your kid go through a time in their life that could be so awkward.  Colleen could have sat on her laurels and waited for someone to ask her and feel stressed about whether it would happen or not.  But she didn’t.  She went after what she wanted and it worked out for her.  Now don’t think we all didn’t worry that A* would feel pressure about saying yes because there were so many of us there, but he genuinely looked happy.  It’s fun to be friends with your kids’ friends’ parents so that your own little family feels more extended and you can share the joys and heartaches together.  It’s strange in a way too to have done this with Colleen because there is a video out there of me serenading Greg at work on Valentine’s day many moons ago.  And I feel like it wasn’t that long ago.

I’m proud of Colleen.  I’m proud of her siblings and friends for supporting her and getting in on the fun instead of turning their noses up at it.  This is a new beginning of something wonderful.

Pass me some Cracker Jacks because this, my friends, is a whole new ballgame! 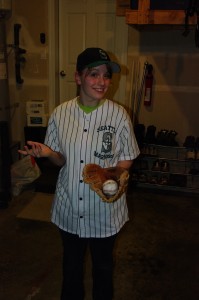 (before heading to A*’s house) 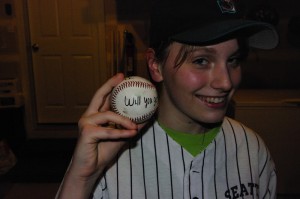 (the ball asking the question) 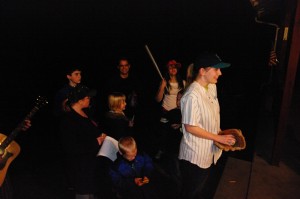 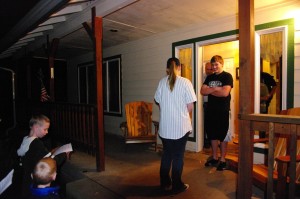 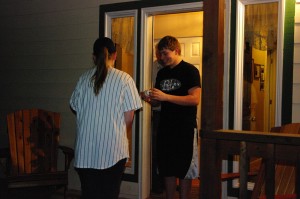 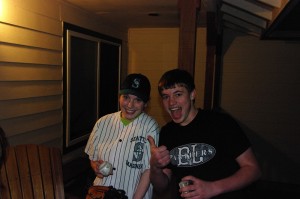 *I didn’t ask permission to use first names so I used initials instead.

My 10 year old daughter is celebrating her ½ birthday tomorrow.  It’s an excuse for us all to don our party hats and have more desserts.  No presents because seriously, I can barely afford my Skor bars right now, let alone throw a huge party and give gifts.  Sad for her but I tried to make it up to her by making cupcakes.  That’s how I roll.  Sad?  Here’s a cupcake.  Overwhelmed?  Here’s a cupcake.  Excited?  Cupcake.  Angry?  Cupcake.  You get the picture.

Atalie, my 10 year old (soon to be 10 *½*) doesn’t care for frosting.  WHA?!?!?!  I know, but I didn’t want to send unfrosted, naked cupcakes to school for her treat.  What kind of mom does that show I am?  A halfasser, that’s what kind.  And I am NOT a halfasser.  So, after much chatting about her treat she asked if she could take over and create something on her own. 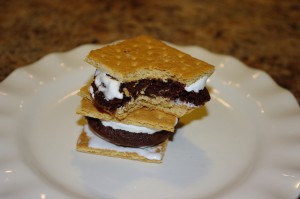 Atalie’s Smore Cupcakes have now been born!  Appropriate for a ½ birthday don’t ya think?

I ran out of cupcakes before I ran out of frosting, I hate when that happens, and while I have a friend willing to take this burden from me I now have a ton of Marshmallow Cream Frosting sitting in my fridge.  Yet, I also have a packet of graham crackers in my pantry.  Hmmm . . .

We’ll chat soon, I hear some leftovers calling my name.