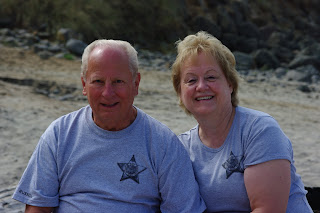 I love my mother and father-in-law. How many of you can say that? It’s not anything showy that they do. They are pretty quiet people that live in a touristy Bavarian village on the other side of the mountains from us. Where the sun shines. Even when it’s 22 degrees outside.

I love to visit them for long weekends or the week. There is nothing that *has* to be done. Like I said, it’s a toursity town, http://www.leavenworth.org/ . Check it out. So, when my family goes there we love to play outside in the mountains, pick apples, cook, read, fly kites, and play a lot of card games.
Thursday my in-laws, Russell and Penny, came to our house. Penny wanted to hit the quilt show at the local fair grounds. Even though we didn’t do anything big and exciting, in fact we watched a lot of the Olympics, ate, and talked, we had a lot of fun. It actually revitalized me. I love our chats. And my kids love it when they can ‘host’ visitors. Especially when it grandma and bampa.
Anyway, I wanted a blog entry that wasn’t deep or heavy. Just a post of appreciation for friendship and support. Thanks guys! 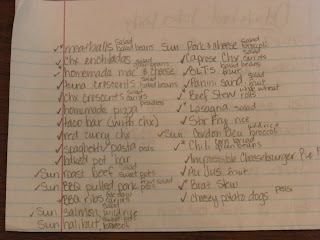 So we have a great arrangement in my home that has been in affect since our 3rd year of marriage. Greg does the cooking and cleaning up while I clean the bathrooms and dust. Pretty perfect huh? I *can* cook, I just don’t enjoy it. Greg really likes to cook so he can get creative and our tummies are constantly happy.
The hardest thing about meals is knowing what to cook and having the ingredients on hand. Greg can throw things together, but he prefers to have an idea ahead of time. So we tackle the menu as a family a month ahead of time so we can go to the various stores using the coupons Colleen has so carefully taken a million years to organize. We plan the whole month at once. How do we decide? Well, we thought about having the same thing for every day of the week. ie. Taco Tuesdays, Pizza Fridays, Pot Roast Sundays . . . you get the idea. After about 3 weeks of doing this, it got old and boring. Now we take each child and ask them what their favorite dinners are. They get to choose 3, along with side dishes. Add Greg and I to the mix and thats 21 meals all planned out. We schedule a couple of nights for take out and a few for leftovers (which we aren’t good about eating) TA-DA! The month is done! Now we just have to go get all the ingredients and we are set. Want to know how much we spend at Costco every 4-6 months? Hmm, I bet you do. I’m not going to kiss and tell though.
There is something very gratifying about having this menu all put together and written in the calendar. Greg & I *can* provide for our children. We *can* do this, despite the fact we still feel like we’re 21 and are waiting for our kids’ ‘real’ parents to come pick them up.
Yes, a table set for 7. Very rewarding indeed. 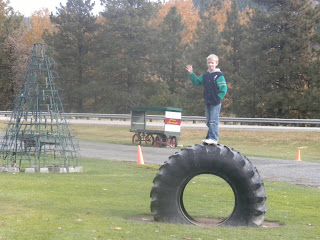 My son, Keegan, is 11 years old. He is a very compassionate person. He likes to rub your arm to let you know that he is concerned about you and hopefully make you feel better. He gives your shoulders a rub, which is actually just a light squeeze because he doesn’t want to hurt you, when he sees that you’re stressed. Sometimes it is hard for Keegan to get what he is thinking into words and express his feelings. So, these gestures are his way of letting you know he loves you.
Yesterday I had a very unfortunate thing happen to me. Something that someone else did put me in danger and Greg needed to take me to the ER. We still needed to pick Keegan and Atalie up from the bus though. Obviously we were going to have to take them with us. It wasn’t such a thing that would traumatize them though so I was okay with it.
We got done at the ER and I was given a prescription for some medication. I needed it filled right away so we went straight to the pharmacy and dropped it off. Greg and I realized that the way our insurance works that we might have to actually pay for this prescription. Only 3 weeks of it would cost us $300. Now, generally our insurance pays 100% of our medical, everything. Yes, the benefits of being owned by Microsoft. Not getting this prescription was not an option and we became very nervous about it. Keegan, though we thought he was playing with his sister, must have heard our concerns and leaned up to my seat and started rubbing my shoulders. I was a mess. But when those tiny hands started squeezing my shoulders I felt weight being lifted from me. Then I hear this, “mom, think happy thoughts. Things will work out if you think happy thoughts.” It became a mantra in my ear as my sweet boy continued to rub my shoulders. “happy thoughts, happy thoughts, happy thoughts . . .” over and over being whispered into my ear. It was almost a prayer. Not a game like you would expect from a child, this was an earnest plea. I’m not sure to whom either. Was he calming me? Or was he asking his Heavenly Father to deliver to me what I couldn’t muster?
As we drove back to the pharmacy and awaited the medicine, the car was quiet. Greg received the bag and asked how much we needed to pay (having a feeling that we had used the benefits already for this particular Rx at this particular pharmacy) and the woman, who is familiar with our family, looked at him and smiled. “Insurance paid this in full.” In full. Exhale.
On our way home Greg turned to Keegan and thanked him. Keegan, confused, asked what for. Greg explained to him that the power of thought truly makes a difference in real outcomes and that just by repeating those 2 simple words, or praying them, he had made a difference in our evening. In my peace of mind. I really, really needed that medication, and we really, really would have had a difficult time without the insurance kicking in. I wonder if things would have been different had Keegan not been there. Because to be honest, I *know* that now we have maxed our limit as far as insurance is concerned (as for this Rx and this place)
Thank you Keegan. And to all of you out there, Happy Thoughts.
Everyone has an opinion, that, more times than not, they want to share with you. Whether you asked them for it or not. I’m guilty of it too. I think a lot of us feel that our opinions will be helpful to others. Maybe lead them into a better direction or avoid mistakes we’ve made when in a similar situation. I don’t know why we can’t just think about our opinion in our heads first and then use a filter before we express it. If we did we may be able to avoid hurting someone with what we feel is innocent information. I’ve found that opinions are trying. Testing. Sometimes people can take offense from an opinion or others may be able to take the opinion in one ear and throw it out the other. Kudos! Here is my opinion on the whole thing. Yes, whether you wanted it or not: 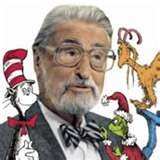 Hold to your integrity though opinions fly about you! Only you know what is best for you/your family in any given situation. Seek opinions of those you trust if you need more information about something and take unwanted opinions with a grain of salt. Shake it off and move on. Remember that most people are only trying to help and don’t know that what they have said to you is either stupid, or made you feel stupid. I could change a Dr. Seuss saying to fit this post so it would say; Do what you feel is right for you because to those that matter won’t mind and to those who mind don’t matter.