Deputy Delirium
. . . we wouldn't have it any other way!
Want to know the secret for becoming the cool parents? 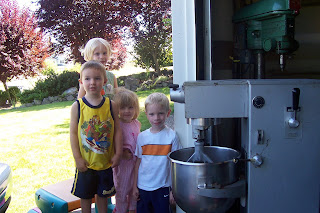 Take some really cute kids, and a mixer the size of those kids (or bigger in this case) 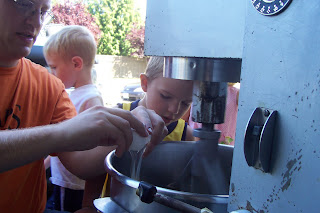 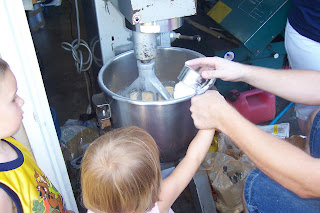 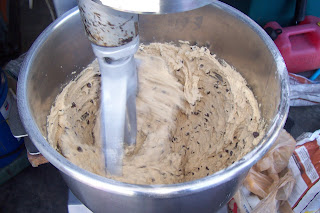 throw in about a Costco sized bag of chocolate chips and beat. Voila! Instantly cool parents.
I wish I had the ‘after’ photo for you. The kids were very proud to have made 280 cookies in one batch. Yeah, the niece and nephew loved them, the neighbor kids loved them. *We* loved them. It’s been a while since we’ve done it. I think it’s time to fill the freezer again.

(what do we do with 280 cookies? we make ice cream sandwiches, sundaes, smore’s and our fave ‘scores’. like a smore but place a grilled banana slice, a heaping amount of chocolate chips and mini marshmallows between 2 cookies. wrap in foil and put on the grill for about 5-8 minutes – or till the chocolate chips and marshmallows are melted. ooey, gooey heaven. oh yeah, and we eat the dough.)

I am an organized person. I am a creative person. I am a person that relies on schedule and routine. Generally. For some reason this year I have become unorganized, more overwhelmed than usual, and extremely ADD. Not what you think, it’s the “Adult Dug Disorder”. You know, the dog in the movie “Up”, the one that has a special collar that allows him to speak and really wants Carl to know how much . . . .SQUIRREL! Yeah. That’s me. I start one thing and *poof* a squirrel catches my attention and away I go . . . . like right now when I am totally off topic from where I wanted to be.

Anywho, I have thrown some pretty cool parties. For multiple occassions. I have had a homemade pie contest where I actually made bronze, silver, and gold spatulas for the winners. I helped mastermind a red carpet event for my Girl Scouts and their Build-A-Bears complete with awards to the pets. (yes, I believe that my daughter’s pet won the most glitzy award) I even had this event catered with finger ham and chesse and peanut butter and jelly finger sandwiches and mini pies. There was a backdrop for pictures to be taken and sunglasses for all. I have done numerous birthday parties. From lady bugs to arks, and my personal favorite just 3 years ago; Atalie’s “Orange You Glad I’m Turning 7” party where *everything* was orange. I requested the guests to dress appropriately. Orange is Atalie’s favorite color and I was pressed for time. Don’t judge. My Halloween parties are the best, at least *I* think so. Our 4th of July get togethers are a blast (hardy har har) with food for more than an army, fireworks that could have sent a child to college had we saved the money, and gift bags complete with all of the garb a child could need to celebrate with style. Not to mention my kids’ Valentine’s Breakfast. Heart shaped pancakes served by Greg and a friend, crafts, swapping homemade valentine cards . . . oh yes, I love a good party. I love the planning, the creating of invitations, the decorations, the food, the guests, and the love I feel from friends and family when my efforts are noticed.

2010 has wiped me out. On December 29th, 2009 my teens had their friends over for a New Year’s Eve party, yes, early. We did a taco bar and I bought markers for them all to use to draw on our walls in the playroom upstairs. It’s an unfinished room so it was fine, and they did a nice job. They played Wii and other games and at somwhere close to midnight we had fireworks. Well, crackers. Close enough in my book. Everyone had a great time, one of Colleen’s friends even told me that I ‘rocked’ and gave me a high five. (she’s awesome) So why is it that I am now into the 3rd birthday party of the year and I am struggling to get energized for it? My teenagers have given up on me. I think I peetered out on them 2 years ago and have just had their friends over for some fun, with the exception of Colleen’s sweet 16, which we had a professional banner made for and hired a clown and face paniter etc. yeah, it was the bomb. But now I am about to celebrate the lives of my 10 & 12 year olds and the piddlefartty person in me is asking them, “why don’t we just do a pool party in the backyard and a campfire with hotdogs and smore’s?” Their birthdays are 7 and 17 days away from now respectively! I feel like a terrible mom. I used to be so good and now I’ve lost the juice. What happened to me? Blech. I’ll let you know how the parties go down. Pray for my 5 year old, his birthday is in November. Maybe I should start thinking about that one now.

If anyone finds my party Muse wandering around out there, could you redirect her to my house? My family would appreciate it muchly.

uh, are you still fixated on the word piddlefartty? just ask me , I’ll tell.